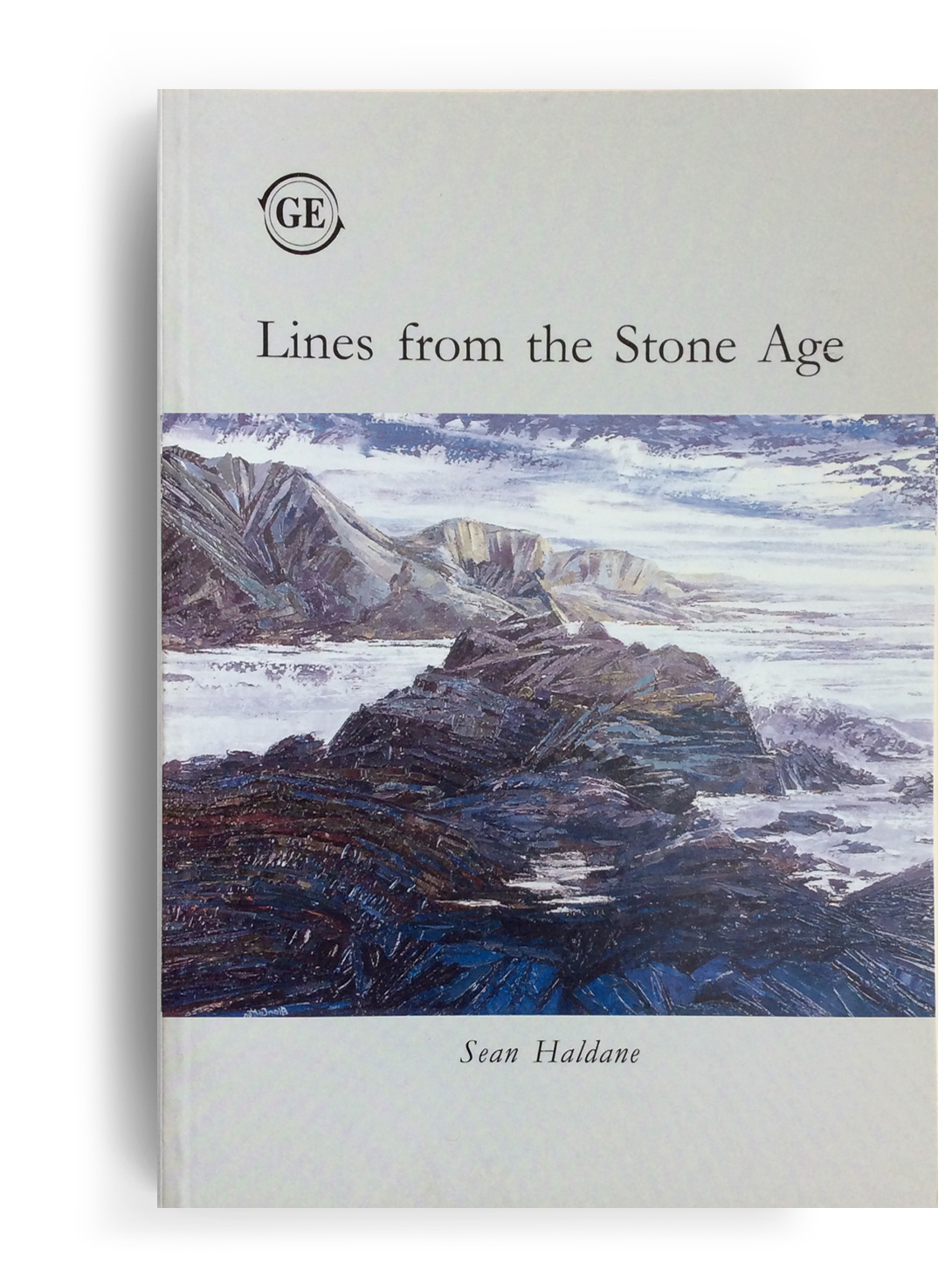 Lines From the Stone Age

We lived here first, we of the big bones,
Craggy faces, brow‑ridges, high skulls.
We speared eels and salmon with ash harpoons
Edged with tanged flakes of flint, we pulled
Sea bass, blue-and-silver striped, onto the strand
With lines of twisted gut and bone hooks. We culled
Strawberries and bilberries, gathered mast
In oak and hazel woods (we grilled
Fowl on hazel sticks) and by the river
We made our wattle dwellings in this land
We had found our own: our great mother.

Before us came the fish, fowl, songbirds, eagles,
Wolves, foxes, martens, elk, hare, lynx, otter –
The mother’s scaly, feathered, furry ones.
And we, the naked, raised our heads
To scan the starry nights for the cold moon,
Mistress of the north‑revolving sky,
Of women’s changes, briny blood, and tides –
The death‑white breakers tumbling on the sand,
Eddying the great mouth of our estuary,
Forcing the salt taste upstream to the falls
Where salmon swirled into our withy weirs
And in the rainbow spray, on stepping stones,
We stabbed into the foam with blood-stained spears.

After us the small people, slope skulled,
Narrow headed, conceived in the dark,
The calculating ones who moved great stones,
Smelling of sour milk (we of fish and meat –
Our women’s breast-milk smell was honey sweet),
The smooth‑browed, calculating, sacrificing,
Landing on waveless inlets with their cattle,
Driving into the mother’s heart, burning
The dead elm trees they’d murdered by ringing bark.
Sacrificing! Why could they not let live?
Naming the mother’s rivers after cows
As if her crystal floods were rancid milk,
Building earth mounds in the river bends
With passages to let in the sun’s ray,
To catch it like an ox’s blood, worshipping
The sun’s death and birth, not the moon’s way.

After them the broad skulled ones, melters of ore,
Warlike, fort builders – people of things
(Swords, helmets, cloaks, cauldrons, torcs, rings)
And of ranks (farmers, chiefs, praise‑poets, kings),
The women not much more than mares they rode:
People of the horse (as the dark ones they enslaved
Were people of the cow – us of the salmon),
Worshippers of neither sun nor moon,
Neither fire nor tide: of thunderbolts
Like their swords, then the dead king on the cross

Invasions from the inundating sea,
Wave upon wave, a flotsam of these others
Who suffocated us just like the sand
That drifted in our dwellings on the wind,
The dunes advancing. We were lost in them,
Taken as their mates, women and men,
Becoming them – their fathers, mothers, children.

We lived here first. Not much of us survives:
A craggy brow here, deep-set eyes there,
Jutting nose, high cheeks, wild curly hair,
Something in the blood, the bone, the mind –
Of all of you. And now this weak hand writes
From one who comes from us, and on starry nights
Comes back to us, the moon above the waves,
Or, with a north wind blowing, by day
Stands at the great waterfall in rainbow spray:
His spear is this poor pencil, and his lines –
Of longing, terror, pride, lust and pain –
Are lines of breakers pounding in his brain.

They were terrible years,

Although I didn’t say so:

Begun in hopes and fears,

But – when I’d turned the pages

Of that book of images –

Ended in hopes and rages.

From the dying woods

Foxes came one by one,

At a wavering run,

With strings of saliva

And hastily I’d shoot them,

I had to shoot Louis –

My hound with the fleur-de-lys

Mauled by a fox, and Jenny

The poodle (a stray I’d found).

I put them in the same ground:

A knoll above the creek,

Unflooded in the Spring,

Their graves the ones with stones,

Among the skunks and foxes —

The kind of carrion

Louis had liked to roll on.

There, by the end of August

Corn and squash were frost-blacked.

In the winter of the year,

At fifty below zero,

With floors of crazy camber,

Blood-spots on sheets of snow

Where wolves of angry pain

Along the moorside, scattering sheep,

Clambering over walls of black stone,

And the hobby hawk’s begging wheep,
I’ve climbed. I’d thought I was alone.

But they were there. They are here

On the ridge in a round barrow

Tussocked with grass, crumbling down,

Boulders tumbled into its crown.

I lie on the grass and press my ear

Against a boulder. Dimly I hear:

Who I am you don’t want to know.

How it is you don’t want to know.

You don’t want to know who I am.

I was killed with me Dad and me Mam.

Death is more than you want to know.

I lie despairing on this slope.

In this world I find no hope.

Here I am with the whiffling air,

And wheeping hawks, and larks so high

I can’t tell where they are in the sky.

No flowers for a grave, the moor is bare.

Draw me a circle on the stone

With your finger, a cross in the circle – so.

And put your lips to the circle – so.

So I can feel that I’m not dead.

I’ve kissed the cross in the circle – so.

Along the moorside, scattering sheep,

I descend to the hazy valley below.

Three hares start from my track as I go.

Yellow-haired girl asleep in the ground,

Under the grass and stone of your mound –

What duets we played on the violins of us!

What thrills from our organ flute pipes! How full-bellied

The throbbing from our tympani, how melodious

The strains from our oboe d’amore, our ophicleide!

Now our music room is locked up, silent with dust,

Our instruments abandoned. Mice have eaten the glue

Of the violins, the wood is rotting, and rust

Eats the metal where spittle ran in the winds we blew.

How sad this lack of any sound except the mice

Occasionally pattering among things not nice.

All that is left of the double concerto we played

Is notes: minims, black crochets and quavers, in bars

I scribble on old paper. The music we made

Is lost on its long journey to the stars.