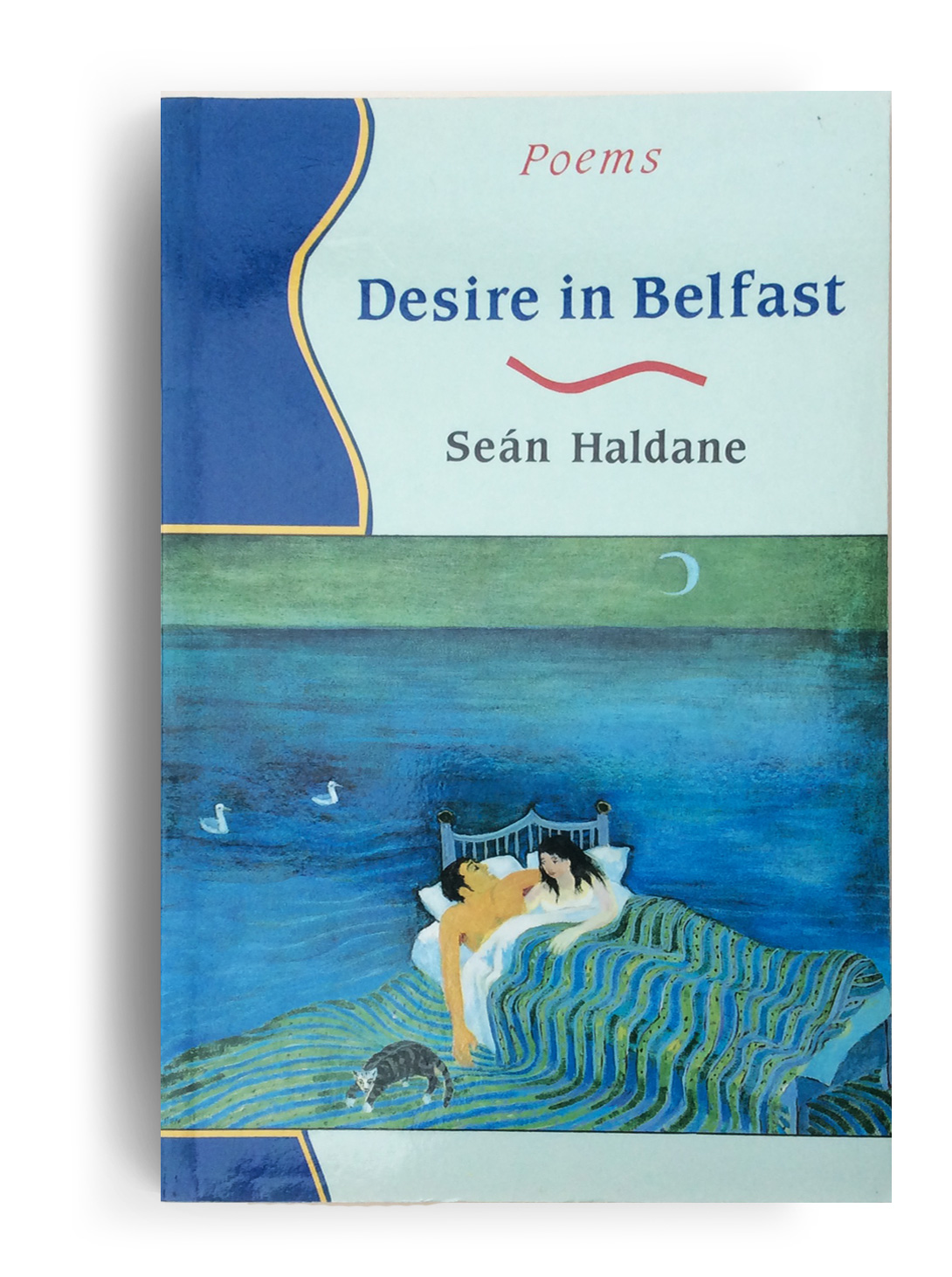 Hothouse of desire,
In the Botanic Gardens,
Jungle damp, steaming pipes, banana fronds.
Against the railing of the goldfish pond,
Leaning back, she pulled up her dress,
Round-bellied as a Hindu goddess.

Volumes of desire,
Behind the shelves of the Linen Hall Library,
She sitting on my knee, I reading Dante:
‘He kissed my mouth all trembling’
(La bocca mi baciò tutto tremante).

School of desire,
Waiting for me in the park, her uniform skirt
Unbuttoned, knickers in her satchel –
We’d lie on leaves in the dirt.

Bush of desire,
Rhododendron dripping on us bare,
Blood-coloured petals caught in her hair.

Flowers of desire,
Hydrangeas in the suburbs,
‘Like blue notepaper’, quoting Rilke, she said.
I wrote our story in fallen hawthorn petals,
Printing it in the crushed daisies and buttercups
We made our bed.

Reservoir of desire,
Children and pensioners playing with model boats,
Us on a wrought iron bench,
Hands in each other’s clothes under our coats.

Concert of desire,
At recitals or the symphony,
Thinking of afterwards – against a wall
In the dark puddles of an entry.

Journey of desire,
The last Cave Hill bus at night,
On the back seat of the empty upper deck,
My eye on the round mirror above the stairs,
Her fingernails dug into my neck.

Song of desire,
The blackbird at Island Mohee
Which brought a saint eternity,
Us among the brambles kissing,
Purple-mouthed with blackberry.

River of desire,
The Lagan, factories wrecked by Luddite time,
Gladed by nettles, burrs, thorns,
Millwheels stopped in slime,
A muddy dell, us crouching in the mire.

Hill of desire,
Woods, sheeps’ paths, caves, paper and shit,
Peeping Toms… On the summit
Us lying in heather and gorse on fire.

Lane of desire,
Buttermilk Loney, where before the Twelfth
Townies dragged down branches for the bonfires
(And groped the two backward sisters
From the white, half-doored cottage),
She stepping around the cowpats
And singing ‘A la claire fontaine’.

Rain of desire,
Pouring down the windows of the car
We locked ourselves in
Parked off the Hightown Road on the moors
(B Specials patrolled in Land-Rovers with Sten guns),
Lying skin to skin.

City of desire,
Us walking hand in hand
(‘Stand still ye sinners!’
Bellowed at us by a soapbox preacher),
Half a million rages
Rising with the smoke from chimneys,
The air sparkling between our eyes.

Poems of desire,
Graves (‘one story and one story only’),
Blake’s Book of Thel, Rilke’s autumn day, Goethe
Tapping hexameters on his mistress’s shoulder,
Breton’s woman with the woodfire in her hair –
And from me to her how Spring would pass,
May blossom shivering from the tree
Falling white on grass.

Stones of desire,
The dolmen in the Giant’s Ring.
Among the chocolate wrappers
And broken bottles glistening
By moonlight, us in our blanket, trembling.

Stars of desire,
Orion ungirding his sword,
The rising Milky Way –
Sheathed in her I lay.

Coals of desire,
In January, heating a borrowed room,
Bursting frozen pipes in the attic,
Ceiling plaster falling on us naked.

Death of desire,
My disgust.
Love had turned to lust –
That sticky, tender love.
Recalled after thirty years
It brings me to tears.

October. Still the yellow butterflies
Dawdle around the yellow dandelions.
Asters like nebulas of Venuses
Drift in the field. Propeller search planes drone –
Like Lancasters returning to Belfast
After the war. The airmen here wear green
And hate it. As in that artsy poem by Frost,
This soft morning was mild etc. Am I obscene?
I’ve found my femme fatale. My thinning hair
Reveals the scar I got that otherwhere
(I smashed the windscreen when an A30
Hit black ice on the Malone Road, then a tree).
I’m not unhappy. Under this green sod
Perhaps a home awaits. If there’s a God
He’s in me (so I feel, without disproof
Until I take the thunderbolt of truth).
‘Dog is God backwards’, my daughters say,
‘Dad can bark like a dog.’ I’ll have my day,
Then under dandelion-dappled sky
Of aster blue, a sleeping dog I’ll lie.
My youngest climbed the shed roof in the garden
To pick some pears and told us ‘They taste golden’.
Son of a bitch, I could be, but I think I’m
The last in the New World to bark in rhyme.
Here they pronounce Dad ‘Dead’. A woman said,
‘Whenever he was dronk he’d lay in the bid
And roar. Oi always loved moi Dead.’ I like
It here. Maybe in time we’ll go back West.
All the best –

PS The postal workers are on strike.

‘A Matter of Time’

She loved me. I loved her. It ended. Now

One eye hides behind a leaf, the other

Is she alive? The repro doesn’t tell.

There’s no fragrance in a Xerox smell.

Irradiated love. By what nerve gas,

What blastless neutron warfare was it killed?
So wails the lover lost and losing: I.

Inside myself I pulled her down to hell,

Not outside on those crushed glades of bluebell,

Not in that cold dawn when she came to bed

And gave me one last time the flower I’d bled.

Layers of Xerox back in time’s machine,

As love it started. I made it obscene.

And now I try to make a Xerox clean.

In Gratitude for the General

The Elect who followed in the General’s track,

His last mad rush to gain more territory,
Ran more risks than the bullets at their back:
Not all the villages were pacified.

Angry officials claim them but at night

Shiver inside, playing chess to smother

The clamorous beat of hearts longing for mother.

As leaves vibrate in the bush, birds call,

In the village square to proclaim control:
The villagers remember the General.

He fraternised with some, slept with their women,

Though openly at midday through the square

Would promenade his straight-backed, perfect wife,

Some of the children playing in the mud

And dominating nose. One broken woman

Still limps from when in drunken despair

He threw her down a high veranda stair.

It is said the Capo’s directorial suit,

His deputies’ shirts, jackets and ties

Come from the General’s trunkful of supplies.

In the city – where he had gone laden with maps

To promote his finds – accused of playing God,

The General was shot by a firing squad.

The war between the villages and city

Is so old no one knows when it began,

Although the General himself would say

It started with his first rebellion.

Always moving along, he could not stay

In either village or city, each campaign

Would draw him further into new terrain.

Looming with cyclonic shifts of light,

And then the terror of the sudden night.

On the journey no rewards except the greetings

And kind handclasps of passing savages

Who recognised them: in the lakes’ mirrors

They looked the same, bronzed and dishevelled,

Lithe as animals, cunning in their eyes.

Until they reached the high frontier, the stars –

As if they entered a new universe.

This, then, is where the General came

On that final survey trip from which he returned

Raving with his caravan of goods.

The Elect can learn from him: not to go back.

Not trying to convince: bulldozers rust,

Skeletons in their seats, on the foothill track,

Of city into new territory,

Fleeing from the cruel pillagers.

Frantic village officials with their bust

Of the General, and their in-house gossip

About the size of his penis, his sudden violence

(They bear proud scars) would shoot the Elect on sight,

Unknowing that beyond the horizon’s haze

Lies the world the General sought. The Elect

Beside the crystal lakes pointed with stars

Draw maps by moonlight and by firelight,

And write accounts of miracles and dangers,

Wondering how to get these to the few,

Disguised as citizens or villagers,

Whose eyes must brighten and whose hearts must yearn

For these eternal heights of no return.

Sometimes the Elect, disloyal to the General,

Disgusted with the village cults whose message

Crackles on the radio when not jammed

By city static, wish him stuck in hell:
He beat his women but they cherish theirs;

His track sometimes circles back on itself

Where theirs now cuts through rigorously straight;

Their maps are no longer the same, nor is their thought.

They shun the stagnant lowlands where he fought.

Then in bad times when their supplies run low,

They yell and quarrel and threaten to throw

Each other off cliff edges, or in fear

Under their feet. It seems that their New Age

Is founded on a love infused with rage.

At times they sense the General’s eyes in theirs:
It was his restless search that brought them here

To mountain tops so passionately clear.

Sometimes on rocky paths they think they feel

His hand touching a shoulder, and they wheel

To face in ecstasy the midday sky

Where spinning waves, the vortices of time,

Whirl into points of light.

Or are they sucked in by, our life and breath?

This sky the General saw when facing death.